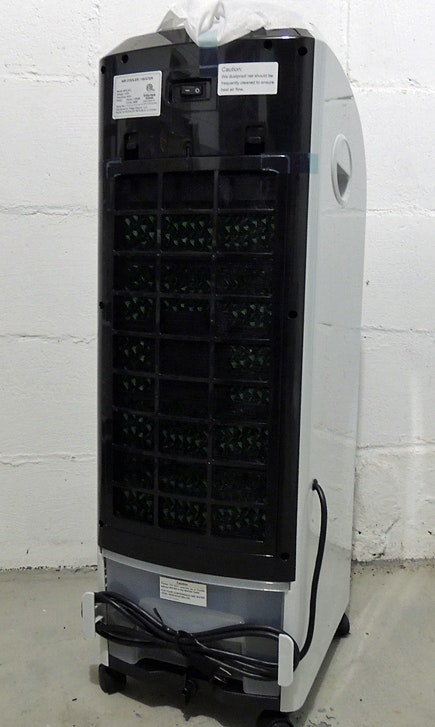 Just in time for our first warm day in a while, today's Star Tribune had an ad from the Universal Media Syndicate for something called Mira-Cool.
As it's described in the ad, it sounds indistinguishable from the Cool Surges they were marketing last year, which I wrote about here.
Even better, Consumer Reports did a test in 2009 that concluded, 'Because of its negligible cooling in our tests, we've given the Cool Surge portable air cooler our Don't Buy: Performance Problem judgment.'
What was the test CR put it to? Here are the details:

We controlled conditions around [a 200-square-foot] room to simulate an 85°F dry summer day with a relative humidity of just 57 percent.
...Our string of sensors showed the device failed to appreciably lower the room's overall temperature during a four-hour test.
We also tested the Cool Surge at an even drier, desertlike setting of 25 percent relative humidity, again, at 85°F. Even in these conditions, which are suitable for an evaporative cooler, we measured a mere 2 degrees of cooling during the four-hour test.

You may have seen full-page ads for the $298 Cool Surge. It promises to cool a room up to 10 degrees using no more energy than a 60-watt light bulb. Here's what Consumer Reports tests found. MeacoFan 1056 Pedestal Air Circulator. A superb and powerful fan that oscillates horizontally.

Of course, I don't know that the Mira-Cool is the same exact machine inside as Cool Surge. Here are the similarities, based on the generalities available in the two ads.
From looking at the two ads, it's clear that at least the outer shells of the two coolers are different, although they appear to be the same dimensions. It will take another review by Consumer Reports to find out if the Mira-Cool performs any better than Cool Surge.
Amusingly, the four photos across the bottom of the two ads are identical... except they're not the same photos. Instead, the photos have been reshot with the same content:

Repackaging the ad, repackaging the product... I wonder why? Didn't they build up any brand equity in the Cool Surge name last year?
One difference between the two ads: I didn't notice any claims about Mira-Cool being 'eco-friendly,' unlike last year's Cool Surge ad.
________

about the Universal Media Syndicate, its many products, and its parent company, Arthur Middleton Capital Holdings.