The Settlers (Serf City: Life is Feudal) was the first game of The Settlers franchise. It was developed by Blue Byte Software and was released in 1993 for the Commodore Amiga and in 1994 for MS-DOS. Serf City (Life is Feudal) is a strategic simulation of feudal empires vying for space on the same 'world.' You are the king and direct your serfs to expand your empire buy constructing a variety of buildings from farms, various mills, mines and guard posts.

A great start to a great series, The Settlers (published by SSI in the USA as Serf City) is a fun micromanagement game that is based on a tried-and-true 4X idea, but executed in an innovative way: by letting you control the smallest units possible in a game.

Similar to Populous, The Settlers lets you control little computer people and lead them to control the entire world. You do this by giving one of 21 possible occupations to each of your 'serfs,' and building 24 types of buildings. One of the best things about the game, and one of the first things you will notice, is the great cartoony animations of all the units. You will spend a lot more time looking at the various serfs as they go about their business than concentrating on the game ;) They are bigger than Populous people, which makes them more detailed and easier to notice the various jobs - especially in SVGA mode.

The second best thing in my opinion is the wonderful interplay of various variables in the game, which combine to create a fun and reasonably realistic economic model that is far from boring. As William Criswell said in his (too harsh) review of the game for Game Bytes, '...Probably the best way to describe gameplay is to walk through one of the production systems. Keep in mind that what I describe happening is animated and actually happens in real Serf City time, i.e., buildings are constructed by a serf they do not just appear on the screen when ready.

A good point to start with is the lumberjack. Your serfs need wood to construct new buildings and tools and it is your lumberjacks' job to provide it. The lumberjack roams the countryside until he finds a suitable tree. He then proceeds to chop it down, removes the limbs and carries it back to his hut. At the hut a transporter (this type of serf is responsible for transporting all merchandise between buildings) picks up the log and takes it to the sawmill where another serf cuts the log into lumber. The lumber is picked up by another transporter and depending on the current demand for wood takes it either to a building construction site where a construction serf uses it or to the toolmaker. Or it might be stored in the castle or a warehouse.

Other systems involve mining, food production, gold production, tool making and weapon making. All the systems are interdependent in some way and keeping all these systems flowing smoothly is the heart of the game and proves to be very addictive and challenging. If you fail to keep good control of these systems your roads quickly become clogged with merchandise thus slowing delivery of everything down.

Although you are given various methods of controlling supply and demand of merchandise it is only to a certain degree. Contrary to what the game manual states, you are not omnipotent. For example, if you decide that for the moment you have plenty of wood you can not instruct you lumberjacks to cease cutting down trees. If you want them to immediately stop the only choice you have is to demolish their huts which sends them back to the castle to wait for reemployment. Of course, this means you have to rebuild their huts when their services are needed again. This is definitely not an efficient or easy way of dealing with wood production. This method of production management does not apply to all the trades but to enough of them to be irritating. Control of individual buildings should have been included to allow finer control of production.

In addition to keeping your serfdom running smoothly the player also needs to build his or her military. The military is used to expand your borders, either by the taking of unclaimed land or the capture of enemy buildings, and to defend your serfdom. The military consists solely of variously ranked knights (advanced rank is achieved through training). Knights can only attack enemy military buildings, castles and knights. Civilian serfs can not be attacked but if a serf's building is located in territory lost to an enemy the building is immediately burned down and the serf returns to his castle. Combat is strictly knight versus knight and all knights carry only sword and shield. The only factors affecting combat are rank and morale (which is largely based on the amount of gold the knights' serfdom possesses). Warlords this is not.'

Simplistic combat mechanics and weak military aspect in general make The Settlers too easy, especially because the AI is quite bad. Once you master the economics of your own empire, it is only a matter of time before you can conquer the other tribes and win the game. The game does include a two-player mode, but it is only playable via an awkward split-screen interface - no modem support here. There is a number of 'missions' to choose from, although they are simply preset games.

Despite a weak AI and far too simple combat mechanics, The Settlers deserves our Top Dog tag because building your economy is so much fun. Think of the the game more as an extended version of a 'software toy' like SimCity rather than a challenging strategy masterpiece like Civilization, and you will have a great time. Two thumbs up!

This and Warlords were probably my two favorite games growing up. What I'd do to get the ol' Amiga back up and running...
Settlers IV was the only sequel I tried, but it didn't have the same magic for me. Warlords III on the other hand was a timeless masterpiece.

Can i do this with Mac? or am i simple.. uh huhuhuh

this was brilliant - please re release it

I have this game on CD, the first time in my life I bough a game on CD.
Good old days, no matter how many years passed, I just always like to play again a bit, with the first Settlers.
One of my all time favourite game.

RUSS: You can't just play DOS-games natively on a modern pc with modern Windows. Use DOSBox. D-Fend Reloaded is a great version with an easy-to-use graphical user interface.

MY COMPUTER WONT INSTALL THESE GAMES ANYTHING I CAN DO?

OMG!!! It's one of my favorites! I bought it two or tree times, because the disk problem. It's really classic, I become a little fan of The Settlers series until The Settlers V, I love city building and resources management, I love plan where to place a farm, a mill, a baker shop, then watch they working and product goods. I like to see geologist hit the mountains and hail.
But The Settlers V bring the Hero come, cause this game-mode of RTS were popular at those years, and I don't like it. Although, I still try to play The Settlers VI and VII, VI is fine but hard to win for me, VII is nightmare.

This game was a amazing memory. Played it over and over 1.5-2 decades ago. Please come back.

the nice thing is they have made settlers for years up to settlers 7. Now you can play online too.

serf city... is it really abandonware? and not ubisoft 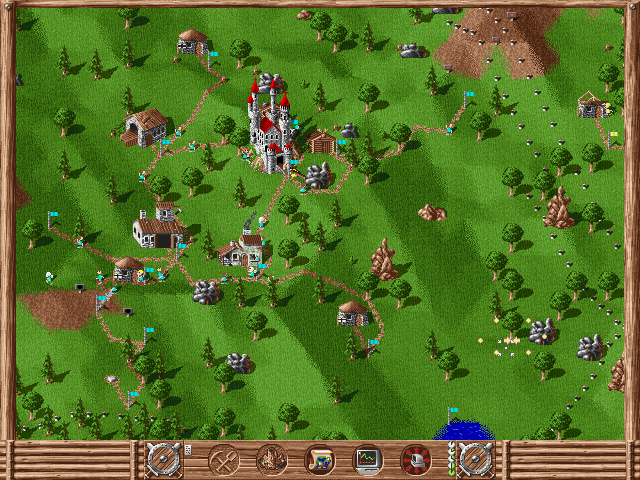 I'm programming a re-make of Serf City - Life is Feudal...
Just search for 'Bits Serf' or have a look on my website 'gliblybits.de' (for english version scroll down and click on 'In English') Please make a updated version of this game. This would be a best selling app.

Beautiful game. Spent months of building with these cute little villagers. Never seen such a game like that since.

Share your gamer memories, help others to run the game or comment anything you'd like. If you have trouble to run Serf City: Life is Feudal, read the abandonware guide first!

We may have multiple downloads for few games when different versions are available. Also, we try to upload manuals and extra documentations when possible. If the manual is missing and you own the original manual, please contact us!

Ultima IV: Quest of the Avatar